The Difference between Quantitative Easing and changing the treasury maturity structure


However, if you look at each bond market through surplus analysis, you can see the difference between the two operations.


A. Changing the treasury maturity structure 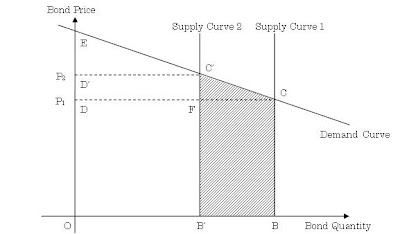 Of the bond buyers' surplus decrease, DFC'D' transfers to the government. The other part of the decrease, FCC', is the deadweight loss. 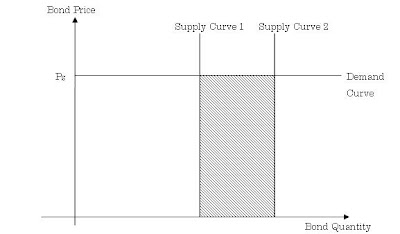 On the other hand, as short-term interest rate has hit the zero bound, the demand curve is flat. That is, T-bill and the money is equivalent in this market (That is the point many commentators - such as Krugman - emphasize). So, the bond buyers' surplus doesn't change before and after the issuance increase.

As a result, only the government's surplus changes to compensate the reduction it suffered in the long-term bond market (shaded area). 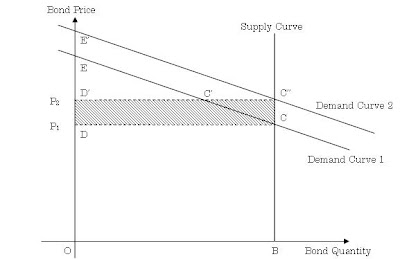 In Quantitative easing, the Central Bank participates in the purchase of the long-term bond. So the demand curve shifts from "Demand Curve 1" to "Demand Curve 2". In that case, the bond buyers' surplus doesn't change; it just shift from DCE to D'C''E' (*1). On the other hand, the government's surplus increases by the shaded area DCC''D', which equals ECC''E'.

That government's surplus increase is the amount of "seigniorage" which the Central Bank monetized. It shows up explicitly in the change in bond price as shown in the above figure, so its effect on inflation expectation is more "direct" than in changing the treasury maturity structure case.

(When the Central Bank doesn't purchase the bond directly from the government, some of the surplus is diverted to the arbitrage profit of the bank. But if the competition among banks works well, that arbitrage profit approaches zero in the limit.)

Besides, that difference in total outstanding involves deadweight loss as shown above.