Paul Krugman preferred this equation to the original Taylor rule.
The original one can be expressed as follows, according to Taylor's own expression in his Bloomberg column.

There are two merits in Rudebusch version over the original version:

On this Taylor rule matter, a commenter of this post at "Macro and Other Market Musings" blog made an interesting suggestion.

Intrigued by this comment, I defined NGDP-version Taylor rule as follows:

In this equation, I just replaced constant term and inflation term of Rudebusch version with NGDP Growth Rate, and rounded the coefficient of Unemployment term to nearest integer. It may be crude, but with the merit of simplicity. This equation says that the target rate should be set at minimum rate that suffices dynamic efficiency, once NAIRU is accomplished.

Here is the graph of rate calculated by this version along with Rudebusch version and actual rate: "FFR" is the actual Federal Fund Rate, "Rule" is the rate calculated by Rudebusch version, "ngdp" is the rate by NGDP version.
As you can see, NGDP version does urge FRB to act more quickly and boldly than either actual FFR or Rudebusch version. And that signal is not limited to past several years. S&L crisis, IT bubble and its burst, housing bubble and its burst,... In every case, NGDP version urged FRB to hike or drop FF Rate more quickly and boldly.


But aren't the parameters of this NGDP-version Taylor rule also ad-hoc? Um, maybe. So, now, let's see what happens if we conduct regression analysis like Rudebusch did, just replacing inflation term in his version with NGDP Growth Rate term. Here is the result:

Unfortunately, adjusted R-squared is not so high... 0.489, as opposed to 0.810 of Rudebusch version. The t-values are not so impressive either... 5.1, 1.6, -6.9, in above order. The t-value of NGDP term is not significant even at 10% level. This result verifies that FRB hasn't considered NGDP Growth Rate as policy target so far. (Maybe it's going to change hereafter, or, so it is hoped.)

Add this NGDP regression version to the above graph, and you get this: You can see that the movement is rather modified than original NGDP version. However, during 2002-2003 period, this version is the highest among the four.


In fact, if you compare this to what John Taylor asserts FF Rate should have been during this period, it's very close. The black chain line is what John Taylor asserts as derived from his original version of Taylor rule.

And as for forecast period, i.e. after 2009 Q3, NGDP-Regression version indicates the highest level of FF Rate among three. This also fits what John Taylor asserts in the forementioned Bloomberg column. That is, he asserts that today's ideal FF Rate level is not far from zero, while Krugman and other people says it's lower than -5%. Although NGDP-Regression level is around -4%, it's still nearer to zero than other two rates. 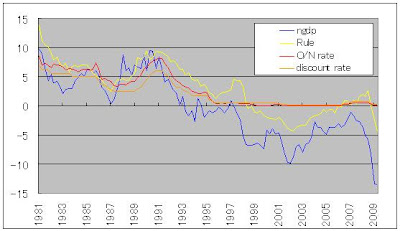 This is what it looks like in Japan. Here, too, NGDP version urges to act more quickly and boldly than either actual policy rate or Rudebusch version.

(I didn't calculate NGDP-Regression version, because that regression is almost meaningless in Japan, which has been caught in liquidity trap for almost 15 years (as you can see in the above graph). I used 3.5% as NAIRU, based on Mr. kuma_asset's estimate. O/N rate became monetary policy tool since 1995 in Japan. Until then, discount rate was the policy rate.)
Posted by himaginary at 21:48 2 件のコメント: