When zero interest rate is not enough to revive the depressed economy, quantitative easing is the next step for monetary policy to proceed. However, it is often the case that small increase in money supply is not enough. You'll need large increase in money supply to obtain some effect, but there is always risk of doing too much. That's what the ketchup theory of inflation warns us.

Speaking of phase transition, it may be also interesting to draw phase diagram in monetary policy. If you compare liquidity-trap economy to solid phase, normal economy to liquid phase, and hyperinflation economy to gas phase, it goes like this: 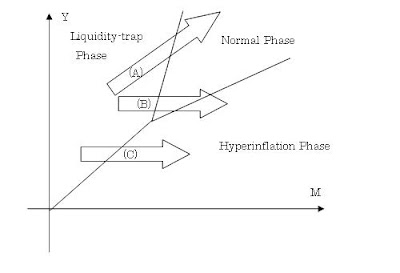 Arrow (A) is what quantitative easing aims at. That is, by the appropriate increase in money, economy makes transition from liquidity-trap phase to normal phase.


BTW, I've also done some maths on this analogy, and will explain them in later post(s).
Posted by himaginary at 3:27